A Profile of Artist and Astronomer Joe Bergeron

A Profile of Artist and Astronomer Joe Bergeron
June 26, 2018
Discuss this article in the forums Joe Bergeron is a former planetarium director, a space artist, author of ten novels, and an amateur astronomer with 50 years experience in observing and outreach. His artwork has been featured by major publishers over the years, he's served as an astronomy volunteer with the National Park Service, and after decades of purely visual observing, he's finally begun to turn his hand to astrophotography. Joe was kind enough to offer his thoughts about his lifelong interest (and considerable expertise) in space and astronomy. Here's our Q&A with Joe Bergeron:

Q: Your day job is an unusual one—you're a space artist, working with planetariums, book publishers, and even Time-Life Books. How did you get into that line of work?

A: My first paying job of any kind was working at the local planetarium in my home town. One of the things I did was develop new shows. The budget was close to zero, so if I wanted to show some specific thing on the dome and it didn't already exist in our small slide collection, I had to create it myself. I was already known for being good at drawing, and now I also taught myself to paint, mainly by copying the techniques of other space artists who I admired, such as Rick Sternbach and Ron Miller. I improved rapidly and was soon selling science fiction and space art to individuals and publishers. I became known by showing at conventions, and by the old-fashioned method of visiting publishers in New York City with my portfolio.

Q: What is some of the space art of which you are most proud?

A: The work I did for Time-Life Books was the most prestigious I ever managed, and some of the best. They published an extensive book series called "Voyage Through the Universe", and all twenty volumes needed illustrations. I created artwork for four volumes, which amounted to something like twenty interiors and one cover. This was well before the advent of digital artwork. Each of those acrylic paintings demanded a lot of thought and effort. For a while I even had a NASA model of the proposed "Freedom" space station in my apartment to use as a reference.

Much later I was approached by an academic publisher to illustrate a new textbook on astronomy. They wanted digital artwork, and this was just on the edge of the availability of computer hardware powerful enough to do the work and cheap enough for me to afford. It was my first substantial digital job, and it was a big one.

Much later still, I was hired by the Space Science Institute to create a wall-sized piece showing the Japanese space probe Hayabusa (Falcon) exploring the small asteroid Itokawa. It was part of a traveling exhibit about asteroids. I had intended to handle this massive job purely digitally, but I'm not ILM (Industrial Light and Magic) and I wasn't able to create a satisfactory digital asteroid. I wound up making the biggest painting of the asteroid I reasonably could and combined that with a digital spacecraft for the final piece.

Finally, I produced a lot of pretty solid digital pieces for my "Cosmic Cat" children's book. An illustration of the space shuttle by Joe Bergeron created for Time-Life books. Credit: Joe Bergeron/Time-Life.

Q: You have a fine stable of telescopes acquired over decades of serious observing. If you had to pick just one, what's your favorite telescope and visual observing set-up?

A: I have always favored things that are small, yet perfect, over things that are big, yet clumsy and unrefined. Therefore, if I had to pick just one, it would be one of my Astro-Physics apochromatic refractors. Choosing which one would be tough. If I were stuck in one place, it would be the 155mm f/9, especially if I could have an observatory for it. If I were a rootless, wandering hobo (as I often am), I would pick the much smaller 92mm Stowaway.

Q: Visual observing or imaging? What is your current, ah, focus?

A: After 40 years of strictly visual observing, I felt like I had seen pretty much all there is to see with my smallish telescopes. I now mostly do imaging, a whole new challenge, improving my results as I gain experience (and better equipment).

Q: Is there a telescope you regret selling or giving up?

A: I have fond memories of most of my former scopes. If I could recover one in particular, it would probably be the 94mm baby-blue Brandon refractor on its Unitron mount, not because it offers any capabilities that my current scopes can't beat, but because it was so beautiful to look at. Fortunately, I am rarely silly enough to sell anything that is really excellent or that fills a vital role. I don't churn equipment. When I find something that works for me, I keep it if at all possible. For example, my 155mm refractor is 25 years old, and the 92mm is 16.

Q: What is your most prized observing accessory… for imaging or visual observing?

A: I'm going to say my ZWO ASI294MC-Pro CMOS astro-camera, even though I haven't had it long enough to get much of a chance to use it yet. Q: What's your favorite object (or type of object) to observe?

A: Overall, the dynamic planet Jupiter. For deep sky, I like planetary nebulae because they are often colorful.

Q: Is there a celestial object (or objects) you still seek to see?

A: Not really. I've been lucky enough to see and observe the entire celestial sphere.

A: No particular favorite astronomer, but for a writer, I'll plug my friend Ken Fulton, author of "The Light-Hearted Astronomer Observes Again". Oh, also my other friend, Sue French, writer of "Deep Sky Wonders" and a columnist for Sky and Telescope.

Q: Is visual amateur astronomy a dying art? Will anyone be looking through a telescope in 20 years, or will it all be imaging?

A: Visual astronomy is a relaxing, low-stress, contemplative activity, or at least it is once you know what you're doing. It encourages the imagination and brings to mind the long struggle of the human race to understand the universe around it, often using instruments similar to, or worse than, what is commonly available to amateurs today. I hope it never goes away, and I hope that the dark skies that make it possible never do either.

Q: You have much experience as a stargazing sage and astronomy guide in the National Parks. Can you offer a few words of wisdom to amateur astronomers to help us improve our skills in astronomy outreach?

A: My success at outreach comes mainly from simply showing up, and probably more in spite of my personality than because of it. Luckily, a fair number of park visitors seem to enjoy my dry, sometimes acrid sense of humor.

Oh, one more thing about outreach. If you are serious about it, don't make it about yourself. Don't make it an exercise in self promotion. Don't encourage a personality cult to develop around yourself. It's unbecoming. Keep it about the stars.

Q: Can you share a particularly inspiring astronomy outreach experience? If so, what it?

A: Hmm, yeah, someone at a talk I gave told me I was funnier than Tom Bergeron (whoever he is) and had a better personality. Q: What are a few of the most amazing things you have seen in the night sky over your many years of observing?

A: Many things on this list could best be seen with the naked eye:
- Several major auroral displays
- Two total solar eclipses
- Some gigantic comets, notably Hale-Bopp and Hyakutake
- The Leonid meteor storm of 2001
- The astonishing Comet Shoemaker-Levy 9 comet impact scars on Jupiter
- The Magellanic Clouds, the only other galaxies that can be explored in detail with a small telescope

Q: What's your favorite place in the U.S. to observe? In the world?

A: My favorite place was the back deck of my friend's old house in New Zealand, a dark, quiet, peaceful place for exploring the far southern sky.

Q: Do you have some words of hard-won wisdom for newcomers to amateur astronomy?

A: Read books. Even old ones. Learn the basics before setting out. Don't ask simple questions in online forums when you can easily research them for yourself. In fact, don't rely on forums much at all, because you don't know what kind of nonsense you might hear from some half-baked old doofus.

Q: Speaking of art, do you have any new space art projects in the works?

A: Nothing major. My interest in space art has waned significantly. My artwork now usually takes the form of landscapes and portraits. I am working on a few minor space pieces which I hope to sell at Spacefest.

Q: Since you are a graphic artist and an astronomer, why don't you produce sketches made at the eyepiece? Presumably, you would be able to produce some very fine work of this type!

A: I'm not really a graphic artist, which implies page design, text-based stuff, logos, and the like. I'm a painter and an illustrator. Anyway, drawing at the telescope is too much like work. I admire the craft, but trying to draw by a dim light at the telescope and produce something accurate does not appeal to me. I'd rather work with good lighting in a studio. If I lived in the era of Lord Rosse I guess I'd see it differently.

Q: You also write sci-fi and fantasy novels. What's your latest work and where can our readers find it?

A: I've written ten novels so far. All are available on Amazon as printed books or Kindle editions. I'm currently working on another novel, a WWII horror-fantasy novel about an American submarine.

Q: Do you have a favorite astronomy quote?

A: "When I explore the real universe, I use precision optics from Celestron." --Leonard Nimoy
(just kidding)

Q: How can amateur astronomy make the world a better place?

A: We can remain outside, quietly alone in the dark, rather than making trouble somewhere else, or disappointing people in some brightly lighted place.

Or, if we feel like it, we can share the views with the non-astronomy public and perhaps open their eyes a little wider.

Q: Where can readers learn more about your work and observations?

***
This article is © AstronomyConnect 2018. All rights reserved. 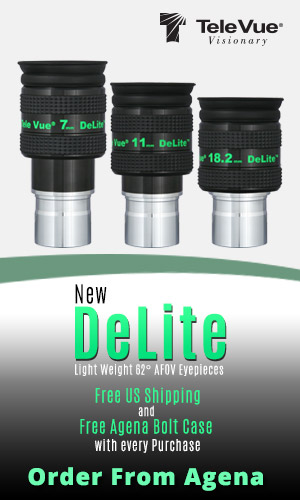